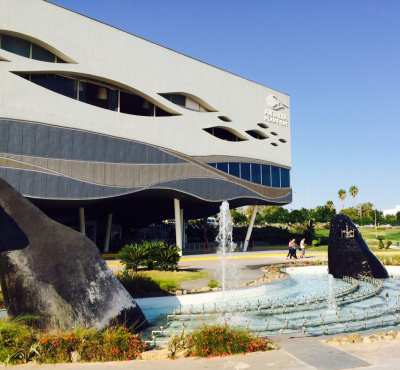 Beside the 19 conventional air-handling units that needed to be integrated via Modbus RTU, it was the integration of the remaining equipment that was most challenging.The project was previously integrated with a KNX TP based solution and was not capable of collecting trend data, reporting data, nor of running alarm servers and due to that did not fulfill the customers’ requirements. On top of that, there was a need to connect the edge device level to an upper lying energy management and analytics system of a local provider who also did the installation of energy analyzers in the power boards of the building. The product of choice capable of controlling, visualizing and monitoring AHUs, capable of integrating a KNX based field bus system, capable of storing trend data and generating reports based on this data that are sent to local authorities and capable of pushing all this data via OPC to an upper lying EMS system was LOYTECs L-INX Automation Server with a LKNX-300 KNX extension module.

Thanks to the integrated gateway and control functionality of the L-INX Automation Server Termmarket, LOYTEC Competence Center in Turkey, has been able to fulfil all integration requirements of the customer with just one piece of hardware. Hardware costs and integration time could be reduced significantly. Being able to integrate, monitor and control different protocols and systems might be quite complex, might require additional hardware like gateway solutions and might become very time intensive. Sticking with the L-INX Automation Server helped Termmarket to avoid all of that happening and led to a building complex that is not just having the world’s largest tunnel aquarium but is now also finally having a fully integrated and sustainable solution.