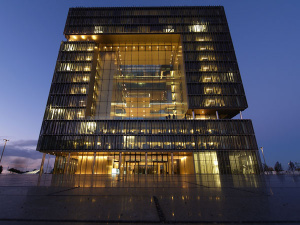 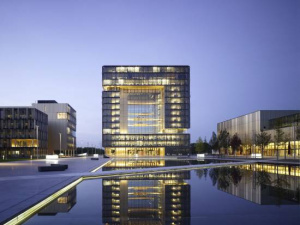 It was Europe’s biggest house moving when ThyssenKrupp relocated its headquarters to Essen (Germany) last summer. Dominant centre of the new headoffice is the Q1 building, forming an impressive landmark in its distinctive shape of a cube. All the buildings on the campus are based on an overriding design framework, the shell-core principle. They consist of at least two L-shaped individual structural bodies that surround a shared space. Two facade types thus arise — one facing the central space with the courtyards and atria (the “core”) and the other facing the exterior and relating to the open spaces (the “shell”). The individual elements of the buildings form a common center, a space for people to meet and communicate.

The panoramic windows to the north and south create a transparent, open impression and carry a sunshade system that is unique in the world: The approximately 400,000 slats give the building a face that changes according to the incidence of sunlight. The axis can rotate and thus align the slats according to the position of the sun in an infinitely variable manner.  Other materials as well were built in in remarkable amounts, for example 320,000 meters of wiring (excluding IT), approximately 9,000 meters of water pipes or around 16,000 m² of glazing.

ThyssenKrupp’s demands for sustainable use of raw material resources were met consequently in the design and construction of the buildings and grounds. This is reflected among other things in an efficient energy supply concept, the predominant use of locally available or produced materials and an energy-efficient heating and cooling system for the buildings. The integrated partially wireless room automation controls lighting, sunshades and air conditioning within all buildings of the quarter. The system schedules and controls the room temperature by selecting the energy level subject to presence detection, automatically analyses the occupancy rate of the offices, regulates daylight-dependent brightness control and permanently determines the corresponding set points. Via IP-phones the employees still retain full control. Through consequently demand-oriented construction of the system 30 percent of heating and cooling energy and 60 percent of lighting energy can be saved. The ThyssenKrupp Quarter therefore was awarded the German Certification for Sustainable Buildings in Gold.