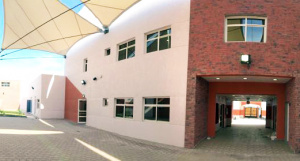 The good impressions AHMED ISHAG, LOYTEC competence partner, led to an even bigger project. The ministry of education asked for a central building management system that operates and integrates with the electrical, mechanical and low voltage system for monitoring controlling and reporting. Ahmed Ishaq Co. as LOYTEC System Integrator/Full-Service Operator Asia showed an innovative solution with reliable and dependable system that ensure cost reduction, energy saving, easier maintenance and an operator-friendly user interface.

The school is serviced by 33 package unit 2 stages for ventilation and cooling. 33 LOYTEC LSTAT-80x-G3-L1 network thermostats are distributed over 3 L-INX automation servers through Modbus RTU and control the units by 33 LIOB-55x by LIOB-IP mode. The sequence of operation is according to the pre-set time schedule. User override is accepted for a certain amount of time, and occupancy is considered. In addition, domestic water pumps are controlled by LIOB-55x I/O modules on auto-mode.

The school electrical loads are serviced by two 1 MVA distribution transformers as two separated incoming feeders. Each feeder is connected with 850 kVA generators through 1600 ampere ATS (Automatic Transfer Switch), and there are also two 10 kW UPS for critical loads. Full system status monitoring via GUI using LWEB-802 and LWEB-900 is included - with the ability of controlling On/OFF for distribution and lighting panels regarding the serviced zone through L-INX automation server and LIOB-55x: Recording energy metering, rush-hours of energy consumption are reported. In addition, network components like THD (Total Harmonic Distortion) ensure grid quality. The UPS charging status and values for all parameters ensure the backup system quality.

24 educational classrooms, labs, and administration offices make in total 45 zones which are distributed over 13 DALI devices, LDALI-3E104, – 4 channels each to control more than 1426 DALI electric ballasts. Each serviced area includes two LDALI-MS1 sensors for specifying lux and occupancy state. In addition, one LDALI-BM1 per area is in use to select among 3 pre-set modes (AUTO-50%, dimming, manual on-off). Constant Light Control is applied for each zone via LonMark functional profile in order to implement and achieve the lux level required on the working plan to assure maximum comfort and energy efficiency by linking presence state and lux level. Auto burn-in for fluorescent lamps is also considered. A full monitoring and controlling through graphical user interface is handled with LWEB-802 and LWEB-900 via L-INX automation server on LonMark interface (CEA-709) with DALI devices.

The school is secured by an addressable fire alarm system for each zone with smoke and heat detectors depending on the zone nature and main bills for warning in case of fire and evacuation regarding the instructions of civil defense. The whole fire alarm system is integrated on LOYTEC BMS graphic interface on L-INX automation server via BACnet IP protocol showing the status of each detector and bill also definite the fire location as backup and operator friendly graphic interface. The access control system is integrated too on the system and give the ability to control the doors in case of emergency and in case of access card losing. PBX system is also integrated to make all systems easier to be reached and giving the operator the backup system that can help during the system operation.