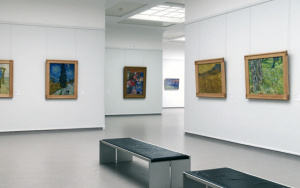 One of the most attractive museums in the Netherlands is the Kröller-Müller Museum near Otterlo. Situated in the center of the De Hoge Veluwe National Park, it exhibits the world’s second largest collection of Van Gogh paintings. But the permanent collection also includes works by other famous artists of the 19th and 20th century such as Mondrian, Monet, Renoir, Picasso, Seurat, Manet, Sisley, Cézanne, Signac and Corot. The museum and the surrounding sculpture garden, which houses more than 100 impressive objects of art on about 25 hectares, attract around 250.000 visitors each year. The Kröller-Müller museum was opened in 1938 and extended with an additional wing in 1977. It harks back to a donation of the couple Anton Kröller and Helene Müller. He originally bought the terrain as hunting grounds; she collected art and donated her collection in 1935 to the Dutch government, who erected the building. 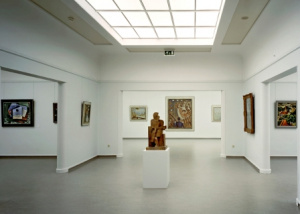 The Kröller-Müller museum is the only daylight museum in Europe. This implies that all paintings are exposed to the daylight via roof screens in the ceilings, supported by artificial light in case of insufficient light intensity outside. For this new way of light control a BACnet building management system integrating Dali lighting was chosen. All lights in the building are controlled via three local installed L-VIS Touch Panels. All functions on these touch screens are configured via a central BACnet OWS (Operator Work Station). This makes the concept flexible without changing the layout or software in the touch panels.
Return on investment was reached within only 5 years due to intelligent and demand driven light control. Conventional lighting is also integrated via L-VIS Touch Panels.