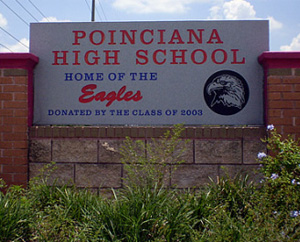 The integrator TBI has been utilizing LOYTEC solutions in the Osceola school district of Florida since 2006. With a current installation of over 90 L-INX Automation Servers and over 60 L-IP Routers, this network is literally under control. Over 130 cooler freezers are monitored in over 50 buildings with LOYTEC components, in addition to thousands of field bus devices.

In 2014, Osceola School District initiated a bid to replace a system in the oldest area of Poinciana High School. The project consisted of 37 AHUs (Air Handling Units), 2 chiller plants and 164 VAV (Variable Air Volume) units. Since the district had a LNS Lonworks™ specification, all new controls had to adhere to the specification from the district.

Mr. Rick Joyner with TBI was awarded the project, and he relates that this is where the discussion led to a new challenge for everyone involved. TBI addressed the ability of installing all IP-based controllers, which meant over 200 devices. At first, the district was apprehensive as they did not feel they had enough network switch capacity available. Mr. Joyner explained that LOYTEC controllers have a built-in dual port Ethernet switch that can daisy-chain devices and make a redundant loop for bi-directional communication. Additionally, he indicated that individual ports would not be needed at the switch and network load would be miniscule. After this explanation, the district was excited to run this project.

The installation of the system occurred in short time spans when school was not in session, and was completed during the holiday break in December 2014. “Installation of the CAT5E IP backbone was as easy as installing twisted pair field buses”, Mr. Joyner relates. The biggest difference was being able to test connectivity as they installed the devices, making commissioning a flawless experience. With the additional LCD display on each device, commissioning and startup was very simple and did not require any PC software.

Jim D’Amico, MEP Facilitator with Osceola, shared his practical standpoint: “While benefits of IP building automation systems have always been what was needed, the step-wise migration path to this new IP-based architecture was not yet fully in place till now. I think one major challenge was to provide these new, IP enabled building automation systems at a reasonable initial cost. This has been achieved with the LOYTEC LWEB-900 system. Another challenge was that common protocols and data formats had to be in place for interoperability with each other. Such protocols as LON must be flexible enough to accommodate all LON system manufactures. Another benefit that the IP system provides is additional flexibility for individual component placement. This is the first IP system installed in the district and we can already see that the possibilities may be endless. Additionally, a large group of tools for dealing with IP-based networks are already existing. Many of these tools are freely available and also lower the costs of troubleshooting.”

Currently, the Osceola staff can service the system from their phones, tablets, or PCs onsite or remote via secure and encrypted connectivity. Specialized and customized graphical projects are available to meet the staff needs and eliminate the need to separate data not intended for the recipient via a district wide installation of the LWEB-900 system. The IT team of the school district is pleased with the low load imposed upon their network and appreciates the comprehensive attention to security and encryption for a building control network.

Poinciana High School – this Building is under control with LOYTEC.