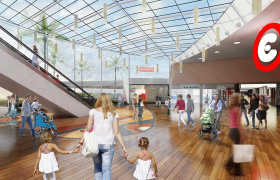 Continente is a hypermarket that belongs to the Sonae Distribution. It was the first hypermarket chain in Portugal (the first market opened in 1985 in Matosinhos), and still remains today as a reference in the food retail sector in the country. Its stores are mostly located in large shopping centers in major Portuguese cities, however, there are plenty of shops with their own space located outside shopping centers. In total, the chain owns about 169 stores in Portugal.

Late last year, the store in Matosinhos began the first phase of a major refurbishment that was only completed in the first quarter of 2015. The market is now the second store with LEED certification (Leadership in Energy and Environmental Design)

The existing buildings management system was completely replaced. RACE implemented a completely new system using the latest technology of LOYTEC. This system was implemented in order to give the store the ability to monitor simultaneously over 1,500 process variables on the network controllers.

The project was designed to help managers of the enterprise at various levels of intervention:

The solution integrates the following systems: