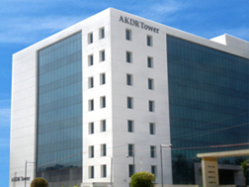 AKDR Tower, an IT building in Chennai measures around 300,000 square feet and is a multitenant commercial building that mainly houses information technology companies.

In 2010, Venba Tech was commissioned to design an efficient BMS solution to integrate chillers, pumps, variable frequency drives (VFD), air handling units, variable air volumes, ventilation fans, energy meters, BTU meters (British thermal unit), etc. Venba completed the design and awarded the contract to one of the leading building automation vendors who was engaged for execution. The system was commissioned and brought into operation in 2012. The customer simultaneously engaged Venba to carry out the operation and maintenance of the building through BMS.

In 2013, the existing BMS software needed an upgrade. The existing platform was proprietary and therefore vendor dependent. The client felt the need of an open, vendor independent platform that can be expanded easily by securing his investment at the same time.

With BACnet/IP, an open platform architecture was suggested to the client. The existing controllers from a third party had support for BACnet/IP. What was needed, was a platform that integrates protocols such as LON, BACnet, DALI, M-BUS, Modbus, KNX, etc. Hence, the migration was designed using LOYTEC’s distributed servers, interfaces that support all the mentioned open protocols.

The existing BACnet controllers of the third party are directly connected to LGATE-950. Modbus integration of energy meters, diesel generator, and VFDs was done using LINX-200. M-BUS was integrated with L-MBUS connected to L-GATE. Chiller plants and pumps were linked to LGATE-950 and the graphical user interface LWEB-803 is used for visualization. Venba migrates from a closed, proprietary platform of third party to an open protocol platform of LOYTEC. The existing third party BACnet controllers will be gradually exchanged with LOYTEC’s BACnet controllers in stages during the following months. As a final step, it is planned to shift the visualization to LWEB-900. This sophisticated interface will further enhance the reporting and management functions.